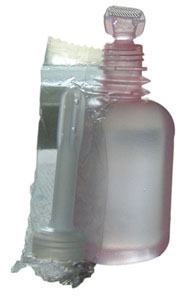 Picture showing soft deionised water bottle and applicator nozzle for Japanese vaginal enema kit. Toward the end of the period of menstrual bleeding, the user twists the seal off the bottle, screws on the nozzle, inserts it into the vaginal canal, and squeezes the bottle. Water is sprayed in 8 directions through the holes in the nozzle flutes, providing a low to medium pressure internal shower. The bloodied water is rapidly discharged. This process can cut the duration of tail-end bleeding down by 2 to 3 days.

Why are these vaginal enema kits not available in the West? Are there negative side-effects to flushing 200ml of deionised water through the vagina toward the end of the period of menstrual bleeding? Is it appropriate to use the word enema in this context? What would happen if you squeezed water up there in which hundreds – thousands – nay, millions of little ions were zinging around?

www.adrianhornsby.com
View all posts by Adrian Hornsby →
This entry was posted in Knowledge. Bookmark the permalink.