A team of geneticists at the Broad Institute in Cambridge Massachusetts is investigating how DNA differs among human genomes from around the world. Over the course of human history, naturally, different mutations have sprung up in different regions, and became prevalent or not depending on local conditions. Having identified region-specific pieces of DNA, the interesting part is then trying to figure out what those pieces of DNA do.

An example under current investigation is the EDAR370A gene, which is found in Asian people, and is thought to have arisen in China 30,000 years ago. To determine EDAR370A’s thing, the experimenters snipped it out, pasted it into mouse embryos, and waited to see how the mice turned out. They grew up to have thicker hair fibres, more sweat glands on their foot pads, and less fatty mammary glands. The implication, in short, is that Chinese girls have sweaty palms and small breasts.

This in itself is perhaps unastonishing, but the real question is: why? The gene not only emerged in China (and could well have emerged elsewhere at some point too), but became prevalent in China. For this to have happened, it must have offered a selective advantage in that environment. I.e. Chinese men must have especially liked Chinese women with small breasts — to the extent that they shifted the entire gene pool in that direction. Compare this with, for example, what happened in Spain, where the women are also quite sweaty, but generally have large breasts, implying a predilection among Spanish men that massaged the gene pool in the opposite direction.

This explanation may however simply lead to another genetic regression, and a hunt for gene variants that make Chinese men say ‘wow’ to little breasts, and Spanish men to big ones. But is it conceivable that breast-size preference is in fact not genetically determined? It is apparent, looking at global culture, that there are many different ideals of human beauty, most of which have significant cross-cultural appeal. This would suggest that the regional associations of one beauty ideal or another are perhaps less genetically programmed than culturally determined.

Let’s imagine a particularly beautiful Chinese woman — one with small breasts — happened to sashay past a Chinese poet 30,000 years ago. He came up with a poem about her, which became a favourite of the day, and promoted a small-breasted female archetype. Further tropes were added through the millenia (modesty, reserve, small feet etc.) to create the traditional Chinese paradigm of beauty. With this in place, selective advantages followed, creating an evolutionary pressure in favour of the EDAR370A gene, and hence its flourishing in that geographic region.

A similar speculative genetic history could be written for Spain, involving a particular busty prehistoric woman, a moustachioed popular cave musician, a hit song etc. etc., leading to the paradigm of a full-breasted fiery lady, and a consequent selective mechanism to promote those mutations, and produce a typical Spanish genome. 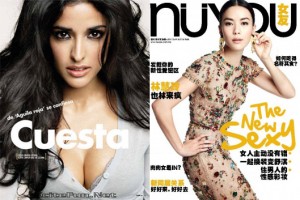 Contemporary magazine covers from Spain and China. Which model has the EDAR370A gene?

The intriguing thing here is the clear case it presents for culture shaping the genome. Normally we think about the genome shaping culture: nature comes first, and nurture follows. But what if nurtured aspects of human culture, as they are handed down through generations, influence the genetic script, and the nature it encodes? As part-artificers of our own genome, are we peeling away from nature to become beings of our own invention?

In one sense, this suggests a greater authorial power for humanity. In reality, it means something more like this: arbitrary fads and viral memes among your prehistoric ancestors have messed with the essential proteins that make you a human being.

As Philip Larkin put it,

They fuck you up, your mum and dad.
They may not mean to, but they do.

N.B. Information in this post about genetic research at the Broad Institute in Cambridge Massachusetts was reported in the New Scientist, 23/02/2013, in an article by Michael Marshall. The association of EDAR370A with Asian people and less fatty mammmary glands in mice is experimentally supported. The theory of a Spanish “big breast” gene, and the reflection upon culture moving the genome, is mine, and has not been experimentally tested. For the purposes of the argument made here, I am assuming that sweaty palms and thicker hair fibres are not selective drivers.