Killer psychopath bent on revenge or sassy rascal with a heart of gold?

When you have small children, you consume a lot of children’s entertainment. And, sometimes you consume the same bit of entertainment over and over again. Forty-seven viewings of Cars, Good Night Gorilla read so many times the spine is in shreds, the tune to Baby Beluga welded so deeply into the synapses that fantasies of strangling Raffi haunt your waking hours.

After a while, it’s natural that a few narrative inconsistencies or plot peculiarities begin to stand out. Take Tinker Bell. In the original Disney version of Peter Pan (1953), she is a jealous sprite who twice tries to have Wendy killed, once by getting the Lost Boys to shoot her out of the sky, once by helping Captain Hook plant a bomb in her temporary tree home. Yet, in the Disney Fairies incarnation, [Tinker Bell (2008), The Lost Treasure (2009), The Great Fairy Rescue (2010), etc.], which are prequels to Peter Pan and feature the ‘birth’ of Tinker Bell, she is so syrupy that you begin to wonder what event will eventually transform her into the blood-thirsty fairy that wants Wendy dead. Do all her fairy friends get massacred before Tinker Bell’s eyes, only for her to be rescued from the flesh-spattered carnage by Peter Pan, which creates a mix of repressed trauma and unhealthy emotional dependency that manifests itself with murderous inclinations?

At least in the case of Tinker Bell, we can understand the motivation behind the change in character. They need the modern Tinker Bell to be nauseatingly wonderful in order to sell her and her Disney brand accessories to millions of little girls. Vengefully complex personalities wouldn’t cut the marketing mustard, so executives probably decided to let the narrative question mark linger knowing most little girls who saw both versions of Tinker Bell wouldn’t notice the psychological transformation, while most parents who did notice it would be so emotionally fatigued by the task of child-rearing that they wouldn’t raise a fuss. 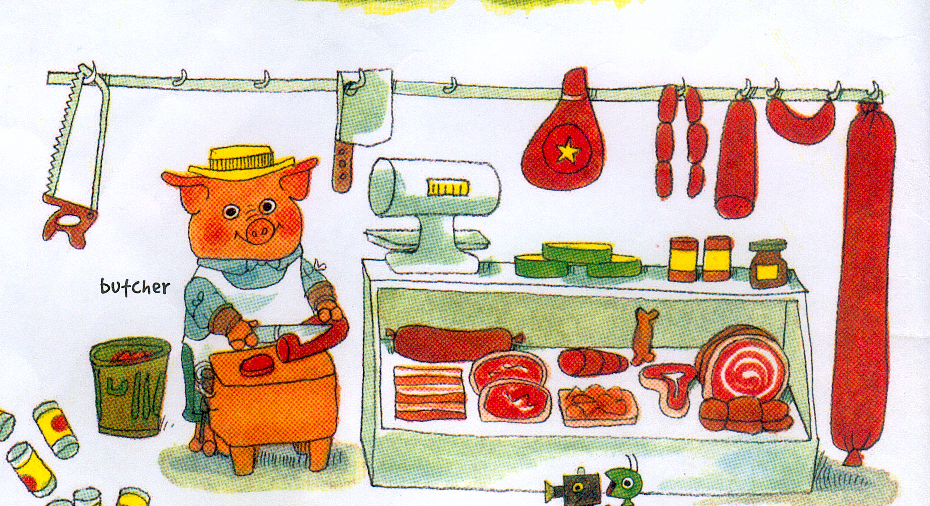 But how do you explain Richard Scarry’s bizarre representation of animal cannibalism? In this image, you see a pig working as a butcher and he is selling what is almost certainly ham and bacon. Surely Scarry new that the idea of a pig butchering another pig and then selling its meat was deeply creepy. And, unlike Disney, there was certainly no marketing pressure to create this image. So, what’s it all about then?

One person who might have an answer is the University of Chicago sociologist John Levi Martin. While still at Rutgers University, Levi Martin authored a well-respected paper titled ‘What do animals do all day?: The division of labor, class, bodies, and totemic thinking in the popular imagination’ that, among other things, analysed 272 Richard Scarry characters to try and divine the socio-logical relationship between the animals. This rigorous academic assessment attempts to decode the hidden messages of labour and class among the animals and includes a mesmerizing chart laying out the social hierarchy of animals in Scarry’s work that is a marvel to behold. His take on the cannibal pig butcher?

“It seems to me that the question is whether there are “animals’ animals” in Busytown – a different set of species without reason that are to these actors what animals are to us,” says Levi Martin. “I’m pretty sure you never see evidence of this, like cat pets in a pig household, for good reason. By making us animals, Scarry had to take the animals out of our lives … I don’t think it’s cannibalism, I think the idea is that in this world there are other life forms that have the same relation to animals that they do to us in our world.”

So, according to Levi Martin, the pig selling pig meat isn’t actually a pig, it’s a pig representing a human who is being socially differentiated because of the status his work as a butcher bequeaths upon him. No cannibalism involved, though still a little creepy.

To be honest, I’m not sure if I’m convinced. Sometimes wild theories are more fun than reasoned analysis, especially when they allow you to make insinuations about an author’s possible psychological perversity. But, Levi Martin’s answer is comforting on at least one level. It’s not only stir-crazy fathers who spend way too much time thinking about the machinations of children’s characters.