To mark this, the day of the opening of the first door, a few notes about advent calendars:

* The term ‘advent calendar’ comes from the Latin ‘adventus’ or ‘coming’, and is a means of counting down the days until Christ’s birthday.

* Officially, advent begins on the fourth Sunday before Christmas, which would have been November 28th this year; for convenience, calendar makers always begin on December 1st.

* The tradition of advent calendars took hold in Germany in the 19th century; Germans also have advent candles that are burned down a notch a day over the 28 days of advent.

* Most people are familiar with the traditional calendars with either painted images behind the doors, a chocolate, or a small gift, but there are also other versions, some geeky interesting like the Lego calendar, some obscene like the $1 million dollar Harrods calendar, and tons of awesome DYI stuff like this.

* This year, our family ordered its four calendars from Richard Sellmer Verlag, the famous advent calendar empire in Stuttgart with 125 designs and 1 million calendars in stock. Richard Sellmer is credited with reviving the advent calendar tradition in Germany after the paper shortages of World War II. “It is true, it is not a legend, my grandfather really did that,” Oliver Sellmer, who now runs the empire, told me on the phone. 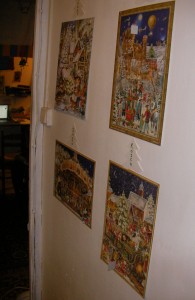 Jeremy Mercer is an author and translator who lives in in the Luberon with his fiancée, two children, five cats, two chickens, ten fish, and one pregnant dog. He is currently on the market for a cheap horse. More at http://www.jeremymercer.net
View all posts by Jeremy Mercer →
This entry was posted in Interesting. Bookmark the permalink.