Harmonograph (with an Indian love brick)

A harmonograph is an instrument for tracing curves representing sonorous vibrations. Swinging pendulums drive the movements of a pen across a sheet of paper, creating geometric drawings of the interplay of the pendulums’ frequencies. Its invention is commonly attributed to Professor Blackburn in 1844.

Harmonographs experienced a vogue toward the end of the nineteenth century. Victorian gentlemen and ladies would attend ‘soirées’ or ‘conversaziones’, gathering around the instruments and exclaiming in wonder as they watched the beautiful and mysterious drawings appear. A shop in London sold portable models that could be folded into a case and taken to a party. There may well be some of these instruments hidden in attics throughout England.

The film shows a two pendulum lateral harmonograph. If the two pendulums are tuned to swing in unison, the pen will draw a circle. A tuning ratio of 2:1 (a musical octave) creates a figure of eight. A ratio of 3:2 (a musical fifth) creates a central loop within a tie, and so on. Infinite shades of chaos emerge and recede between tunings. As the harmonograph plays and the pendulums run down, the drawing closes in on itself. Slight departures from perfect harmony result in interference patterns which shift in and out of phase with themselves, like the throbbing quality of a rich timbre. 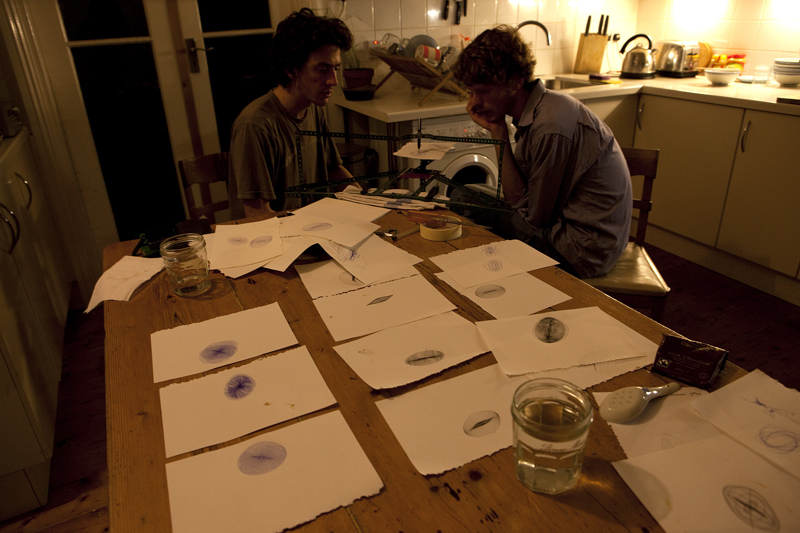 www.adrianhornsby.com
View all posts by Adrian Hornsby →
This entry was posted in KMZ Current, KMZ Features. Bookmark the permalink.

1 Response to Harmonograph (with an Indian love brick)