The image (see image right) shows a colony of Bacillus subtilis. Each of the little grains is one bacterium, with the striae of colour denoting the various lineages present, which express different fluorescent proteins.

Initially the scientists had them all jumbled up in the middle of the petri dish, but as they grew and replicated, the bacteria organised themselves into the pattern you see. The formation is both reproducible and describable mathematically. More provocative however is that it can be successfully predicted using mathematical models that take as their input the bacteria’s raw genetic code. This modelling opens the door to tinkering. With their maths, the scientists are able to design new patterns, run them backwards through the model, and then snip and swap around the genetic components in the bacteria’s DNA accordingly. The new bacteria are then set loose in a petri dish, and the anticipated patterns thread themselves into being through the action of life. The life-form’s choice of behaviour — an expression in pattern-formation — is essentially an expression of its code. If you know the code, you know the life-pattern; and if you know the pattern you want, you can write the life-code. 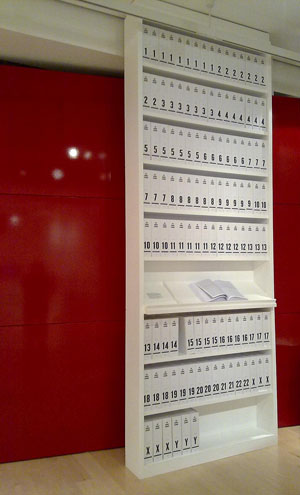 The image is currently on display at the Wellcome Trust (Image Awards 2012 exhibition). It’s in the gallery on the first floor, where last Saturday I stood thinking about it for a bit. Then I wandered across the hall to have a look at something else they have on show: a tall set of shelves bearing lines of large bound volumes of a few thousand pages each (see image right). Printed margin-to-margin on Bible-thin paper, these lay out the sequence of the human genome in its entirety. It really is a lot of code. A typical passage reads something like this: “gagagaggttgagttca”.

So I was thinking alternately about the code-driven patterns of the bacteria, and the long but finite string of letters that in some way describes a human being. At the same time, Tim Vincent-Smith (of nook, sink, harmonographs and much else) was spending his first day with his new born son. He drew a picture and sent it through 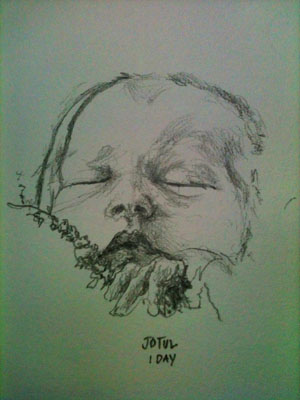 (see image right). A new image, a new pattern-expression. As drawn, the lines of the face, as is the case for all lines, are no doubt describable mathematically. And would it be possible, equipped with the correct mathematical models, to generate the same image using only the raw genetic code scripted upon the child’s chromosomes, with perhaps some additional information from Tim’s chromosomes too to get the artistic touches right? A new arrangement in code expressed as a new baby boy. On a typical day, he says something like this: “gagagaggttgagttca”.

If beings really are programmatic biorobots executing the functions written in molecular longhand down the strands of their DNA, and if life is in effect the reading out of this code in the medium of physical matter, with all the patterns and sounds that accompany and emanate from that process — rather like an orchestra playing the score set before it, or a troupe acting out their play — then there are, here and there, it should be noted, some pleasing patterns formed along the way.

More images of pattern-forming bacteria from the synthetic biologist Fernan Federici can be see here. Tim Vincent-Smith’s account of the birth of the baby boy can be read here.

www.adrianhornsby.com
View all posts by Adrian Hornsby →
This entry was posted in Beautiful, Reflections from elsewhere. Bookmark the permalink.