How Cognitive Illusions Can Make You A Better Dancer 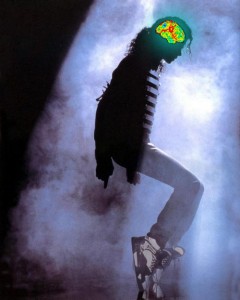 The beautiful thing about Daniel Margulies & Chris Sharp’s “Untitled”, which shows a brain listening to the Rite of Spring (see recent post), is the way the movements of Stravinsky’s music, and the floods of purling colours, seem to harmonise in time. It is almost as though they are dancing with each other. A lull in the music comes, and a cool blue suffuses the brain. A strident chord hits — and red chrysanthemums burst open across the cortical surface. And yet the opposite can happen too. Busy red activity can accompany a slower passage — as though the brain is jiggling from foot to foot in anticipation of the next fortissimo. And equally, a furious musical release can provoke a neural stillness, as though the sheer intensity of it flattens the brain out, and compresses it into a single state of pure blue.

The truth is, much of this is likely to be a cognitive illusion — a product more of the way we think than of what we are seeing. Our brains are fabulous pattern-making machines, and when given powerful music and shifting colours at the same time, we immediately finds ways for them to be somehow expressing each other. We seek these ways out, and having found them, we find ourselves moved by them. What the brain in the film is really thinking is, inevitably, extremely hard to know. Is a particular flush of colour — processing sound, responding emotionally, thinking about an itchy knee, pondering lunch, forming the piece of language “Jeez, how much longer am I going to have to keep my head still in this MRI scanner?”, and so on and so on — ? But even while this specific information about the film-brain’s connection to the music is not very available, for our brains when we are watching the piece, it simply doesn’t matter. With the examples described above, all four combinations of music and brain (music low intensity / music high intensity; brain mostly blue / brain with red spots) work perfectly. Within this set, whatever the brain does, and whatever the music does, it makes sense. Our brains make it make sense. We find ways to marry up the rhythms and mood of the music with the shifts of colour in the brain, and thus actually create the beauty we perceive ourselves to be witness to.

This kind of pattern-making is well-known to neuroscientists (the wily Daniel Margulies among them), and is dubbed “the Christmas tree light effect”. The term comes from experiments showing that if you blink christmas tree lights randomly at people while playing them music, they will automatically discern relationships and synchrony between the two. The trick is a useful one indeed, and has been put to great effect in many contexts.

I noticed it for the first time when I was editing a little movie. I’d made a rough cut, and so dropped in the music and played it back to see how things were shaping up, and — magically — the timing of everything was immediately just perfect. I hadn’t planned it at all, but watching, I saw a musical phrase finish just as the character left the apartment, the door close on the end of the bar, the man throw his hat up right as the trombone came in, and catch it again as the clarinet joined …. On it went. I couldn’t believe it. The rough cut and the music were a perfect meet. Just to see, I moved the music a few seconds forward in the timeline, and watched it over again. And there once more — magically — everything was perfect. Only a new perfect. This time the character left and the door hit on the headnote of a new bar; he threw his hat up and the melody arrived at a long sustain, which seemingly held the hat in the air until he caught it again, and moving on down the street, the trombone came in …. It seemed to be every bit as felicitous.

What I was discovering was that a good piece of film music is so rich, and so riddled with melodic shifts, changes of instrumentation, and points of rhythm, that almost wherever in the timeline you position it, a world of connections and alignments will swim upwards into being toward you. In fact, to cut a piece of film in such a way that it doesn’t go with music — i.e that it somehow prevents the magical dance of image and sound from weaving itself together — is much harder than it is just to let it happen.

For film editors, the Christmas tree light effect is bread and butter. As indeed it is for “vj”s, who throw up semi-random video clips while dj-ing, safe always in the knowledge that almost whatever the clip is, it will work out fine with whatever music they are playing. But the implications go much further than films, or clips, or Christmas tree lights. Because the effect embraces the entire world of sound and movement.

I want to talk about dancing.

Here is what the Christmas tree light effect means for dancing: when you are dancing, and music is playing, you can make a lot of movements, and even if they are completely random, those movements, and that music, will form themselves into a magical expression of pattern and alignment in the mind of anyone watching just by themselves. There is nothing for you to get wrong or right. Just bring together time, movement, and music, and the magic will happen.

On a practical level, this suggests two immediate dancing principles:

1. Firstly and most obviously, make a lot of movements. The more movements you make, the better the chances are that a number of them will strike on something: a headnote, a melodic shift, an instrument coming in or out etc. etc.. High movement density will cover the greatest possible number of things the music can do. This dancing principle can be thought of as the principle of maximum everything all at once.

2. Secondly, if you want to perform a specific movement to coincide with a particular point in the music, you need be much less precise than you think. This is because the pattern-forming brain is very magnetic, and can take any part of the movement, and align it to the musical moment in question. Take the example of a jump to mark the music doing something. It you perform the jump anywhere around the time of the something, the act of leaping up can be the something, the moment of landing can be the something, the moment of maximum upwards acceleration can be the something, and the peak of the jump can be the something. In fact, as the peak of the jump encompasses the period of the upward movement slowing to zero, the motionlessness at the very peak itself, and then the downward fall starting — i.e. the greater part of the jump’s entire duration — the musical something can occur anywhere around the peak and it will work. Essentially, the jump produces such a wide spectrum of potential connections that it is highly likely the music will do something that will relate to the jump very nicely. By this, you can perform your movement (a jump or anything else), and feel free in the knowledge that any part of that movement can be that moment in the music. This dancing principle can be thought of as the principle of free reference.

These two principles, as well as many others along similar lines, can, if you’re following me, be drawn into a single super-principle: dance and fear not.

With cognitive illusions, there is a continuous dance of sound and movement in everything. There is an infinitude of correlation to draw on. And so to become a better dancer, all you need do is become part of this dance. The dance embraces all dance. There is no dance outside of the dance, and the dance itself is neither more nor less than being. And so, my heart, dance — dance, and your cognitive illusions will catch me.

www.adrianhornsby.com
View all posts by Adrian Hornsby →
This entry was posted in Knowledge, Useful. Bookmark the permalink.