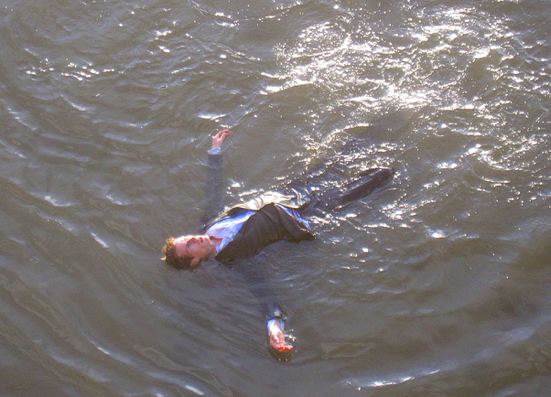 Quinn Comendant, immersing himself in another project.

Keen readers of the Running Eye Blog might have noticed the occasional contribution from Quinn Comendant, the wandering coder from Chico who has taken part in exceptional projects in … well, in just about everywhere. Beijing, Paris, Berlin, Greece, Turkey, London, California, etc. etc. etc..

Recent years have seen him embark on a wide-ranging spiritual quest that involves a strain of Buddhism, a thirst for meditation, and a perplexing guru. Even though Quinn is mostly preoccupied by these ephemeral pursuits, happily he still has time for the occasional cultural lark (see his above-pictured starring role as the mutant mime Loupe) or an applause-worthy political engagement.

Falling into the latter category is his recent involvement in a hack-a-thon in Mexico meant to develop technology that solves issues of migration in Latin America. The life of a migrant is particularly horrible; as Quinn notes, “things are fucked up here: the government has acknowledged more than 27,000 people are disappeared, 60% of women on some routes are raped.”

So what did Quinn do at this hack-a-thon? He teamed with an NGO that provides legal assistance to migrants and then sought a data-driven solution. As he tells it:

“I built a tool (“Pulso ONG”) that might be helpful by conducting surveys over SMS message. Without data from the ground, providing help, enacting policy, and measuring success are impossible. So we use a virtual phone number, and publish it along routes used by migrants, and they can report incidences, and partake in surveys. The judges thought it was good enough to award it the winning prize for the local event.”

Not bad for a weekend’s work. The full Pulso ONG page can be found *here*