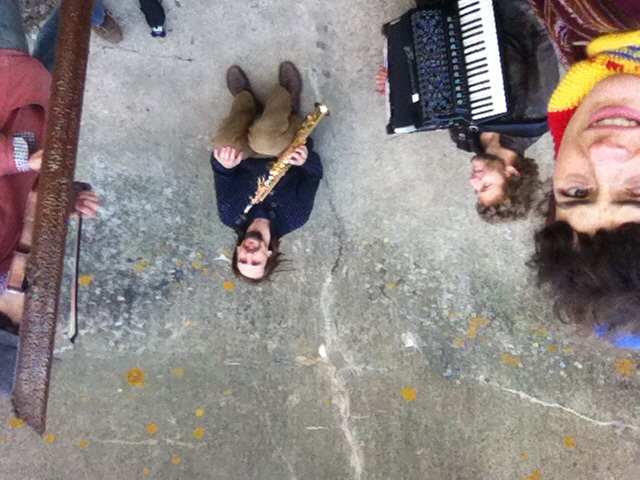 When you think of a Brimstone missile in flight do you imagine yourself watching from its point of departure, in the sky, or on the ground with the missile coming towards you?

Before radar was invented the RAF, choosing the quietest spots along the British coastline, constructed Sound Mirrors: large concave concrete structures designed to focus the otherwise imperceptible sounds of the approaching Luftwaffe to a single point at which a listening ear could detect these sounds and raise the alarm.

When our sound trio Sink arrived at The New Adelphi in Hull on the first leg of our Sound Mirror tour we knew from the outsized wooden mock up of a cartoon bomb sticking into the side of the building that we were in the right place. According to local lore the space for the car park next to this illustrious venue was provided courtesy of a WWII German bomber that had passed over the sound mirror at Spurn Bight on the coast to the east of the city before dumping its payload into this row of terraced houses. How such a terrifying and apparently unjust attack from the air must have helped to galvanise resistance to the invasion.

Today we visited the Spurn Bight mirror, a cracking and lichen-sporting edifice in a barbed wire enclosure in a field of shoots sprouting from concentric ridges of machined earth reminiscent of a zen garden. We added the sounds of our instruments to the sounds of the cows and the birds and the wind in memory of the listeners who warned the terrace-ists to get out of the way of the Germans intent on clearing the New Adelphi a space for their cars to park.

This entry was posted in KMZ Current, Uncategorized. Bookmark the permalink.